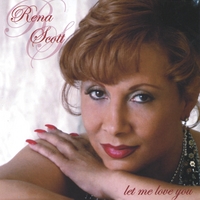 Rena Scott’s powerful voice and unrivaled magnetic style have brought her to the forefront of R&B, Gospel, Pop and Smooth Jazz vocalists. Her new CD, “Let Me Love You,” on her own label Amor Records, is a further testament to her incredible range of talent. The title track was used in the block buster movie “Love And Action In Chicago” shown on HBO, Showtime, Cinemax, ABC and BET. It starred Regina King, Courtney Vance, Katleen Turner and Ed Asner. Her new Single “Remember” is now climbing the Billboard Charts in 3 categories. She is # 9 in the Hot Pop Single Sales. Number “5” in the Hot R&B/Hip Hop Single Sales and # 80 in the Top 100 R&B/Hip Hop Songs.

Rena Scott, who grew up in a Detroit suburb, began her singing career at her elementary school and from there became lead vocalist in the church choir; singing at aprofessional level by the tender age of 13. Rena started appearing in local clubs, attacting audiences everwhere she went. While performing with The Four Tops, she was discovered by a local production company who signed her to a contract. Her first record, “I Just Can’t Forget That Boy, “debuted while she was a freshman in high school. As a student of Wayne State University, Rena landed a job as a backup singer for her idol…Aretha Franklin. Their five state tour ended at New York’s famed Carnegie Hall, and Rena vowed she would return someday as a headliner. This vow became a reality when she sang opposite Michael Henderson on their million-selling duet, “Take Me I’m Yours,” on Budda/Arista Records.

Rena is a seasoned performer and a true professional who devotes her full energy to each new endeavor.In addition to performing live and recording albums, Ms. Scott was the national spokesperson for Harvey’s Bristol Cream, and has also develpoed a successful career singing commercial jingles, movie soundtracks, and cartoon soundtracks. Truly for this lady, the sky’s the limit!

Join us here at Voice Distribution as we present the one and only Ms. Rena Scott.