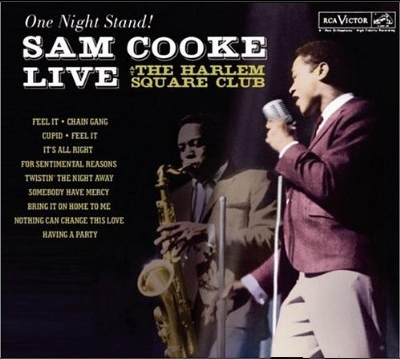 Only 2 left in stock

Here’s a lesson in showmanship. Recorded in 1963 at Miami’s Harlem Square Club, and recently remixed and reissued, this live set from one of the pillars of soul music stands as a testament to the talent, charisma, and timelessness of Sam Cooke. His voice rawer and all the more striking than his studio recordings, Cooke’s voice quakes the rafters- and this mix of the recording is focused on making you feel it, with the backing band mixed to a mere muffled timekeeper. Engaging the audience from the first word, Cooke tears through some of his well known hits, like “Chain Gang” and “Cupid”, at a breathless pace, with the band just holding on, but it’s not until he slows things down with “It’s Alright/For Sentimental Reasons” that everything really hits its stride- just in time for Cooke to spin the whole house dizzy with “Twisting the Night Away”. His stage banter and calls for audience participation throughout show him to be as good an entertainer as he is a singer, and there are moments of undaunted glory- such as when he belts out a bit of “You Send Me” at the beginning of “Bring it on Home to Me”, and I imagine heaven in the club’s cracked ceiling.

TRACK LISTING
1. Soul Twist/Introduction
2. Feel It (Don’t It)
3. Chang Gang
4. Cupid
5. Medley: It’s All Right/For Sentimental Reasons
6. Twistin’ The Night Away
7. Somebody Have Mercy
8. Bring It On Home To Me
9. Nothing Can Change This Love
10. Having A Party