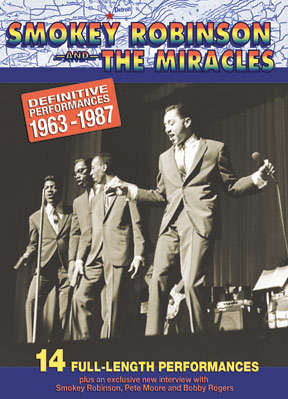 Smokey Robinson & The Miracles-Definitive Performances 1963-1987 features for the first time on DVD, 14 full-length performances from classic archival television appearances spanning three decades.
This 2 1/2 hour DVD is the first official video anthology by one of the most successful singing groups of all-time. Highlights include a powerful performance of “You’ve Really Got A Hold On Me” filmed at the famed Apollo Theatre in 1963, a moving performance of “Ooo Baby Baby” filmed in concert in 1965 and a 1976 performance of the Miracles’ “Love Machine” featuring lead singer Billy Griffin.

The disc concludes with three solo performances by Smokey Robinson including his Grammy-winning hit, “Just To See Her” filmed in 1987.

Included between the performances and filmed exclusively for this DVD, is the first ever in-depth interview with Smokey and original Miracles Pete Moore and Bobby Rogers. Throughout the insightful 75-minute interview, the three Miracles reminisce about the history of the group, Motown, the Apollo and the inspiration behind many of their classic hits. Produced by Reelin’ In The Years Productions”

The Temptations “Get Ready Definitive Performances 1965-1972” D...
Scroll to top